Warning: call_user_func_array() expects parameter 1 to be a valid callback, function 'qode_child_theme_enqueue_scripts' not found or invalid function name in /home/taafomft1977/public_html/quantumfinancial.com.au/wp-includes/class-wp-hook.php on line 303
Skip to content

Lessons on running a successful business

In 2016 Quantum Financial directors Tim Mackay and Claire Mackay were honoured to be asked by the Australian Institute of Company Directors to present at their inaugural conference in Melbourne.

The theme for the inaugural conference was ‘Directing for Performance’ and the conference presentations were broken into ASX, Not-for-profit, public sector and private enterprise streams. A number of our clients are current or former ASX directors, we invest heavily in ASX companies and Quantum Financial is a private company. So our focus was on the private enterprise and ASX streams.

In our presentation we focused on how within our family based business we have managed the successful transition from one generation to the next.

We summarised the history of our business and how Bill, our father and company founder/visionary, had instilled the importance of ethics and independence from day 1 back in 1994.

We shared how he had taken the lessons from his theology degree to create Quantum Financial’s sustainable and successful corporate culture. We also re-counted how Bill had refused to let us, his children (Tim and Claire) join the business until we had proven ourselves in large institutions and let those large institutions pay for our mistakes and our professional education.

We also spoke of the next steps we are taking in bringing in external resources (such as a business coach, external mentors and peer groups and an informal board of advice) to grow the business and better serve our clients.

The Question and Answer session at the end was fascinating as fellow directors in the audience probed us on a myriad of company and investment issues. Given the majority of the audience had their own Self Managed Super Fund, they were also quite keen to talk investments and strategy! 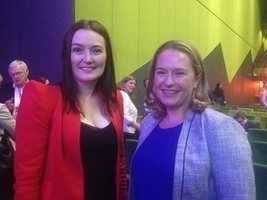 Our key take-aways from the Conference

Australia’s most connected director David Gonski shared his views on the exponential use of the word disruption in recent times. As Chair of ANZ he argued the sometimes over-use of the word can be used as an excuse to mask failure and that the finance/banking industry as we know it would not die any time soon. Returned from a trip to Silicon Valley, he argued it was incumbent on company directors to keep their eyes open not only to the threats but also to the opportunities that disruption offered.

He also turned his thoughts to an investing issue that Quantum Financial has long agreed with – the hazards of company short term reporting requirements. In our opinion, quarterly reporting adds very little value to investors but creates a drain on and distraction to a company’s limited resources. The upside is minimal and the downside is significant. Half yearly reporting by companies is as short term as is required, in our view. We could argue some sectors should be even less frequent (eg property should be annual) but there is also a benefit to having one set of consistent reporting rules.

In a rare display of bi-partisan agreement, both John Brumby and Nick Greiner agreed there should be fixed 4 year political terms in Australia. While the cynics in us think that perhaps such displays are only ever possible in retirement, the optimists in us hope that current politicians can one day agree on such sensible pieces of reform. Longer and fixed terms would help politicians focus more on important structural reforms and better decision making, and less on the short termism encourage by more frequent elections.

Lt Gen Morrison spoke extensively on his experiences of diversity (or perhaps lack of diversity?) in the workforce – in his case, the Australian Defence Force. He recounted examples of diversity issues the army faced and how as a leader he addressed them.

This former Macquarie Bank corporate advisor shared his war stories on the importance of flexibility as an advisor to or director of a company. He likened the role of a director to the strategic directions a captain on the bridge of ship makes while staff manage the ongoing operations (engine room, dining, entertaining, etc).

Surprisingly for someone we did not know much about prior to the conference, former McKinsey partner Siobhan McKenna was quite an impressive speaker. At 29 she was McKinsey’s second every youngest person globally to be made partner. 10 years later today she is Lachlan Murdoch’s second in command at his private investment company Illyria. She was appointed first by James Packer as his representative on the Channel 10 board and then by Lachlan Murdoch. Unfortunately her presentation on adversity she had faced in the board room was ‘off-the-record’ so we can’t report what she said. However, she is certainly an Australian company director we will be keeping a keen eye on.

The Australian Institute of Company Directors

For our wonderful clients who are successful company directors, we highly encourage you to consider joining the AICD. At Quantum Financial we take our role as company directors seriously as we build our successful and sustainable ethically based business. We think membership of the AICD is a great way to:

About the Author: Claire Mackay

I am a financial planner, SMSF expert and company director. I thrive on providing independent, expert financial advice to my wonderful clients. I was recognised as Financial Planner of the Year 2015 and Investment Adviser of the Year 2014. My website is here