The Budget that killed SMSF growth

Cluedo, the great detective game: “I think it was Mr Morrison in the billiard room with the Budget”
You can also read ’What wealthy people really need to do because of Budget 2016’ and our ‘Budget 2016 Survival Guide’.

In early 2015 I stood up at the SMSF Association Conference in Melbourne and warned that the SMSF industry was under imminent threat.

“Government is under massive budgetary pressures and they’re looking for revenue sources and superannuation will be an obvious place they’ll look.”

At the time the then Abbott Government was positioning itself as the resolute defender of the current superannuation rules and promised there would never be any adverse changes under their Government. Never ever.

Notwithstanding what they said, to me it seemed inconceivable that a Government of either flavour could hold this position over the medium to long term. As clear as day, I believed that change was coming to superannuation and Self Managed Super Funds.

However, not even I thought the changes on the horizon would be so large and so far reaching as they have been.

Fast forward 15 months and that brings us to Budget 2016, the Budget that killed SMSF growth.

OK, I’m being a bit cheeky here. I don’t expect that the 2016 Budget will completely kill SMSF growth but it will put a significant dampener on the spectacular growth that SMSFs have enjoyed in recent decades. But that dampening in SMSF growth will be significant and far reaching. 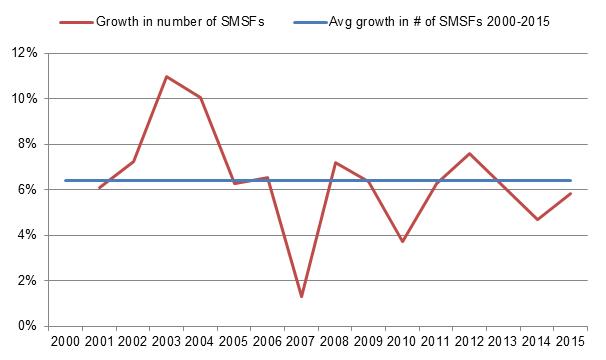 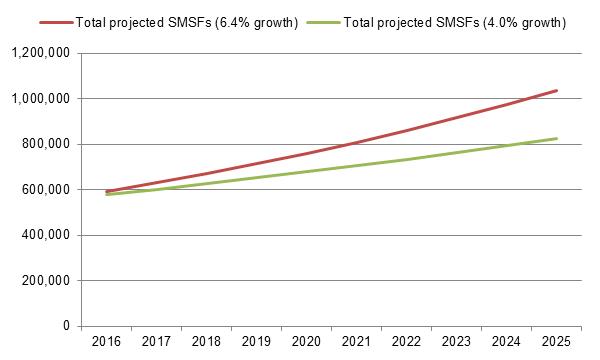 There are five main reasons that we believe growth in SMSF numbers (and hence SMSF members) will taper over the coming decade:

We have long argued that for an SMSF to make clear financial sense, you need a balance (or (combined balances for a couple) of at least circa $500,000. Of course you could have less than that amount and it still make financial sense in some circumstances, but for the vast majority of investors $500,000 was a good, easy rule of thumb.

For wealthy people to get to that critical amount under the old rules was relatively simple. In addition to your concessional (ie pre-tax) contributions (see comments below), you could easily contribute $180,000 each year or even trigger the $540,000 bring forward in one go. Even starting from a zero balance in your super, if you had the available cashflow, you could reach the $500,000 super target in one transaction today. For a couple it was twice as easy as you had access to a combined $1.08m (2 x $540,000) non-concessional cap via the bring forward condition.

As SMSF investors build their super balance upwards from this breakeven amount, the rationale for investing via an SMSF becomes more and more clear cut.
Under the new rules, while it is still possible to get to the $500,000 amount using the lifetime cap (or even $1m for a couple if you haven’t used your lifetime cap already) , that’s as far as you can go apart from the lower concessional contributions each year set at $25,000 before the 15% contributions tax.

The scale benefits that used to be easily accessible under the old rules are simply no longer there.

Hand-in-hand with the lower non-concessional lifetime cap of $500,000 goes the reduced concessional cap of $25,000 for everyone.

For those approaching retirement, this will reduce how much you can contribute concessionally in total over a 10 year period by 29% from $297,500 to $212,500.
Again, the reduced ability to contribute to super means the scale benefits that SMSF investors enjoy as their tax effective super funds grow faster with contributions are lower.

Under the new rules, it just becomes much harder to get money into super and into your SMSF.

Since 2007, one of the key drivers of SMSF growth has been the attraction of positively or negatively geared property investing (via what is known as a Limited Recourse Borrowing Arrangement or LRBA). This has occurred on the back of genuine investment opportunities and on the back of less scrupulous property spruikers pushing LRBAs.

To gain bank finance for such an arrangement, the financier would look at a number of criteria including your ability and intention to contribute to your SMSF to lower the risk to them of you defaulting on the loan. For a bank, the higher the ability of an SMSF to repay a loan the lower the risk was to them and hence the more willingness to facilitate such a loan.

The effect of lower concessional and non-concessional contribution caps means the banks will likely be far less enthusiastic to enter into LRBAs.
When this is combined with already tightening lending criteria and increased property markets warnings, we believe there will be a tapering in the growth of property investing in an SMSF via a LRBA in the coming years.

Over the past 20 years the average number of members in an SMSF has barely wavered from around 1.9 members per fund.

While some funds have three or four family members (~8% of all funds) and some have 1 member (~23%), the dominant characteristic of SMSFs is that they are a retirement vehicle for a couple (70%).

Having said that, in recent years we have seen increased demand from those establishing a single member fund. With the lower contribution caps and for the reasons outlined above, we expect growth in this area to taper.

Reason 5: Maturity of the SMSF market

While Reasons 1 to 4 outlined above arise as a result of the Budget 2016, this final reason is independent of Budget 2016.

As with any transformational, financial innovation, the growth in SMSF numbers has been impressive over the past few decades. However, we do not think their continued growth at current growth rates was ever assured. We have long held a suspicion that we were starting to approach the saturation level of SMSFs where the market had matured to a point where those for whom an SMSF was appropriate already held one. We believe the Reasons outlined in 1 to 4 above will accelerate the maturity point for SMSFs by decreasing the ability for people to contribute to their superannuation.

Hence, as discussed above we believe that growth in SMSFs will fall significantly from 6.4% each year down to ~4% in the coming years.

The exceptions to the rule – rollovers

Having said all of the above, we have a significant number of clients for whom a Self Managed Super Fund will still be a viable option in the coming years.
Some of our clients who are senior professionals have built up a significant amount of funds in their super during their careers but retain a corporate sponsored fund (either a retail fund or an industry fund) as they benefit from low fees and/or advantageous life insurance coverage.

For these people, rolling their super funds across to an SMSF just prior to their retirement will likely remain their best strategy and we will help them manage their way through this process.

Should I still set up an SMSF?

This is a great question and as always the answer is “It depends”. For some it will still make complete sense, for others it may now only be a break even situation, in which case why go to all the effort, bother and risk?

Despite how pessimistically (we prefer ‘realistic’) this article may come across, we remain huge fans of Self Managed Super Funds as the perfect vehicle for our clients to fund their dream lifestyle in retirement.

When we look back with 20/20 hindsight in 5 years time in 2021, we believe there is a strong chance that we will record the 2016 Budget as the catalyst for the fall in Self Managed Super Fund growth.

If you’re not sure whether to choose an SMSF or not, we advise you not to rush this decision or get it wrong. It’s simply too important a decision. Seek independent financial advice and heed the words of Brutus in Shakespeare’s play Julius Caesar:

“There is a tide in the affairs of men.
Which, taken at the flood, leads on to fortune;
Omitted, all the voyage of their life
Is bound in shallows and in miseries.
On such a full sea are we now afloat,
And we must take the current when it serves,
Or lose our ventures.”

About the Author: Tim Mackay

Hi, my name is Tim Mackay and I am The Independent Financial Advisor. I work with a select group of successful pre-retirees and retirees looking to manage their family’s wealth and fund their dream retirement. My website is here