1 reason to invest in Bitcoin (and 13 reasons not to)

I’ve racked my brain and have come up with one reason to invest in Bitcoin. I’ve also come up with 13 reasons not to.

This article was first published in our H1 2018 Investing Insights report ‘Running with the Bulls’. If you would like to receive a copy of our report, either email my team at info@quantumfinancial.com.au or call 02 8084 0453. We share this research report with clients and friends of Quantum Financial.

Note: This is general advice only. It has been prepared without taking into account your individual objectives, financial situation or needs. 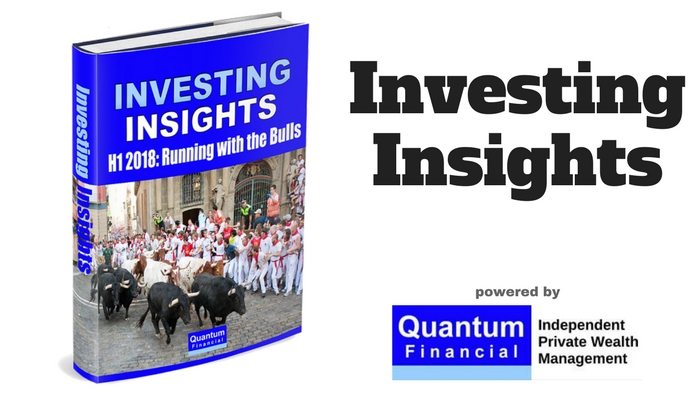 I’ve racked my brain and have come up with one reason to invest in Bitcoin. I’ve also come up with 13 reasons not to.

“This is the way the Bitcoin ends. Not with a bang but a whimper” (with apologies to TS Elliot)

13 reasons not to invest in Bitcoin

1.You may lose lots of money. There is no reasonable basis to value Bitcoin – it’s akin to speculating whilst juiced up on steroids.

2.Don’t invest in anything you don’t fully understand. We try to explain it in our latest Investing Insights, but it really is a fair bit more complicated than the apples and digital apples example we use.

3.Try to ignore that inevitable fear of missing out (FOMO). There is a high chance this is a euphoric, financial bubble. At some point the absurdity of prices becomes too obvious to everyone and the bubble pops. Then we all sit around stunned, wondering ‘What the #$%^ were we all thinking?’

4.It’s not protected or regulated – it’s the wild, wild west out there with no rules whatsoever. If you lose your money you can’t complain to anyone – not to a regulator, not to a bank, not to an ombudsman. You’re completely on your own – best of luck!

5.It is estimated that 50% of all Bitcoin transactions are for illegal drugs, weapons, pornography and pirated software. It is the currency of choice for criminals operating on the dark web. That’s who you will be trading with – again best of luck!

6.If you’re hacked or subject to ransomware, you can lose all your money. Recently in December 2017, North Korea agents from the Hermit Kingdom facing sanctions desperate for funds, hacked a South Korea Bitcoin exchange that promptly collapsed.

8.It’s not investing, it’s speculating. You will only make money if you can find someone else willing to pay more than you in the near future. This pump and dump approach is the very definition of a pyramid scheme.

9.It’s rarely used for its intended purpose as a form of everyday exchange except in Venezuela (where the local currency the bolívar has collapsed) and for those buying illegal guns, drugs and sex.

10.Three of our long held investing rules are don’t invest in anything that has a pretty girl on the cover, is advertised on day time TV or is advertised on the side of a bus. For the pretty girl, think former Miss Universe, Jennifer Hawkins, on the cover of the Myer float prospectus. In September 2017, that well known finance expert Paris Hilton backed the initial coin offering of Lydian along with fellow experts Jamie Fox and Floyd Mayweather. Enough said.

11.It’s volatile & risky. Bitcoin fell 70% overnight in Apr 2013 and 28% in Dec 2017. At the exact same time I write this article, the lead headline on the Sydney Morning Herald website is ‘Bitcoin sinks as website suddenly removes South Korean exchange prices from calculations’.

12.A software bug or security vulnerability at a broker, exchange or a wallet service could mean that your holdings can disappear overnight.

13. Coin Dance and Google Analytics estimate that 96.57% of Bitcoin engagement/activity is undertaken by men. This massive gender imbalance is not conclusive of anything but it strikes us as a bright red flag!

1 reason to invest in Bitcoin

1.If you get out in time, you may make lots of money
“You can tell I’m educated, I studied at the Sorbonne, doctored in mathematics I could have been a don. I can program a computer choose the perfect time. If you’ve got the inclination I have the crime.

Now don’t get us wrong – we strongly believe that the blockchain technology that underpins Bitcoin holds significant potential for revolutionising many industries (our own finance industry high among them) and one day will be of great benefit to society. We are just highly dubious of the speculative mania that is currently underpinning all cryptocurrencies, including Bitcoin.