In late 2016 and early 2017, Quantum Financial’s Tim Mackay travelled to Seattle, one of the largest US tech hubs after Silicon Valley.

In Tim’s travels he identified 2 technology trends to keep an eye out for in 2017. Though both have been around for many years, 2017 could be the year they break into the mainstream.

Those with an iPhone may be familiar with Siri, Apple’s voice recognition software. Those with kids or grand kids may know of Xbox One Kinect voice commands. Some Sat-Nav devices have in-built voice recognition while Dragon Dictate is a computer based dictation program. These are the first major examples of voice computing for consumers. A bit older are the cumbersome phone based queue systems (eg when you call Telstra or a bank) that may have infuriated us all over the years.

In 2017 there are two relatively new products to be aware off – Amazon Echo and Google Home. Both are a huge leap forward from Siri and voice recognition services.

They are both smart speakers in the form of a cylinder device that plays audio (music, podcasts, radio, etc.) and can control Wi-Fi connected devices around your home. They operate based on voice commands – you activate the Echo by saying its name, ‘Alexa’, and you activate Google Home by saying ‘Hey (or OK) Google’. Microsoft’s competing product is named ‘Cortana’ (if you have a Surface Pro with Windows 10 it will come pre-installed – you just need to turn this function on). 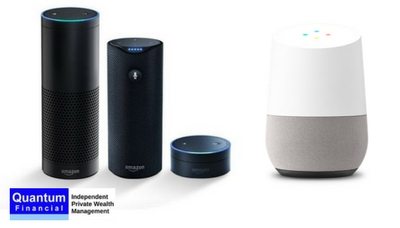 White device above – Google Home (US $129)
While neither the Echo nor the Google Home are currently on sale nor are supported in Australia, we at Quantum Financial have a Google Home successfully up and running. It’s remarkably responsive, relatively simple to set up and understands the Australian accent. On your voice command it will give you the local weather forecast, read the news (US only at this stage), tell you how long it will take to get to work, play music, control Netflix on your TV, play podcasts, play radio stations from around the world, etc, etc. They translate your words into another language and even answer questions you normally type into Google. If you have Wi-Fi based security systems (cameras, lights, sensors, etc.) and temperature controls in your home you can control those by voice. If you have Google Chromecast devices for your TV or stereo you can also control those by voice.

Keep an eye out for these devices as we believe voice computing is destined to materially change the way we interact with technology for the better.